Ideas for working with tulips

We are in mid-tulip season. Tulipa ‘Albert Heijn’, one of the earliest to flower, is going over. He is a particularly luscious pink with a smoky sheen on the outer curve of the petals. His (and it probably should be ‘her’ with all that feminity but with a name like ‘Albert’ I feel compelled to stick with the masculine) foliage is a gentle grey green that matches the emerging foliage of Nepeta faassenii. 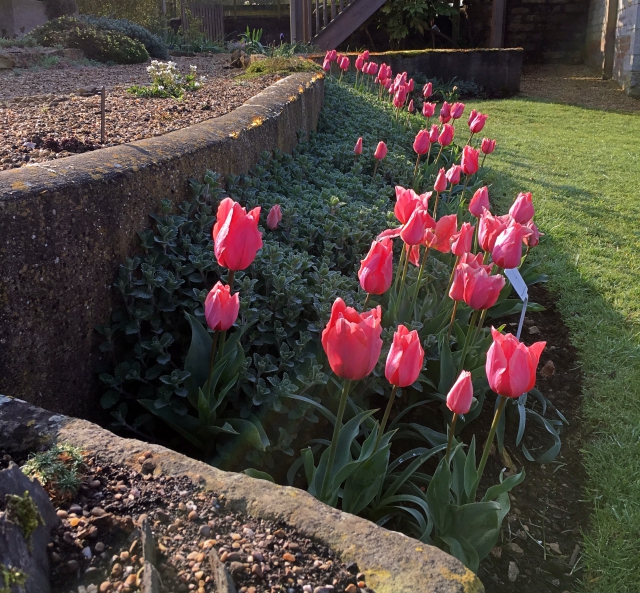 As the flowers fade, the growth on the Nepeta picks up speed and engulfs the tatty, dying foliage of the tulip. We try and consider the effect of mounds of extraneous leaves when we plant our bulbs. Some alliums and large daffodils cultivars are the worst offenders and should be carefully sited where they won’t distract from nearby flowers in mint condition.

See how the tulipa and catmint foliage match? 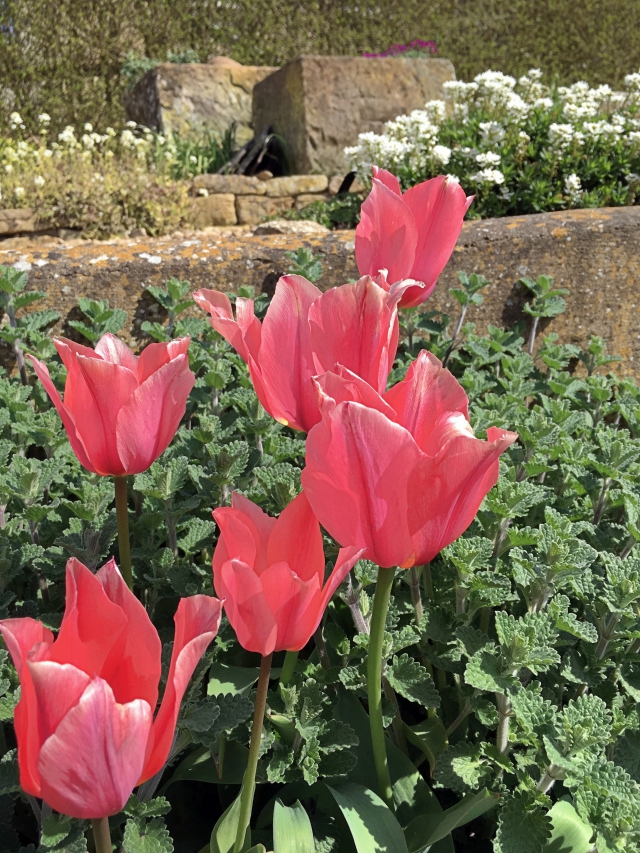 It took some research to come up with this combination and we will grow it every year in front of the alpine bed unless replant disease becomes a problem.

In the White Space Garden, Tulipa ‘Diana’ is in bud. Just a single, white tulip but one with a very long flowering period that means we choose her over other popular whites.

Early in her flowering she has the bed nearly to herself but as the petals fade she is joined by a chorus of silvers and whites.

Here she is in close up: 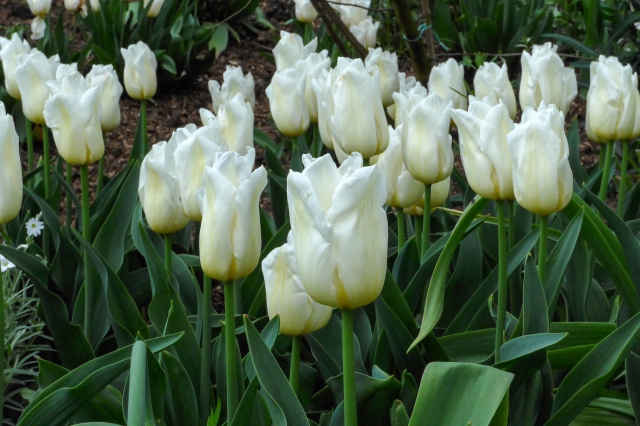 A new white tulip to me this year, is Tulipa ‘Exotic Emperor’, a fosteriana hybrid that I saw in pots at Coton Manor. The outer tepals streaked with green and the sumptuous creamy interior make this tulip worthy of a pot on its own. 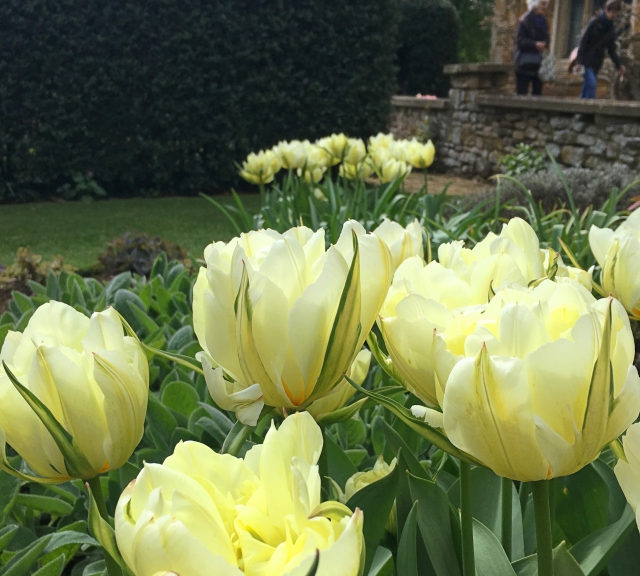 Another combination that I liked at Coton Manor is Tulipa Gavota with Ligularia foliage. A very fine tulip that we have used in our pickery or cut flower garden; it’s good to see it used here in a border setting.

Back at home, Tulipa Ballerina is flexing her petals in the sunshine. 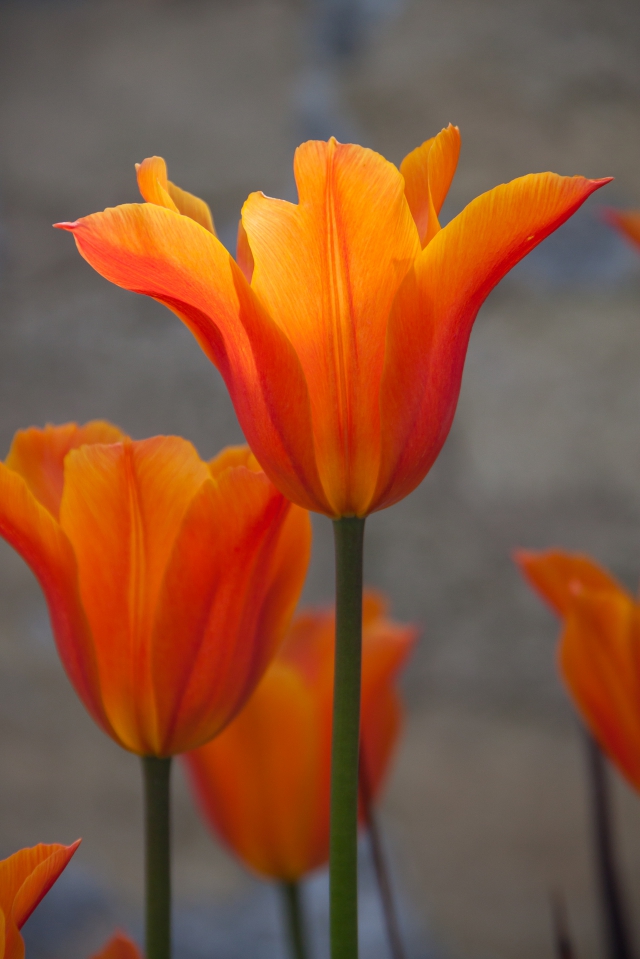 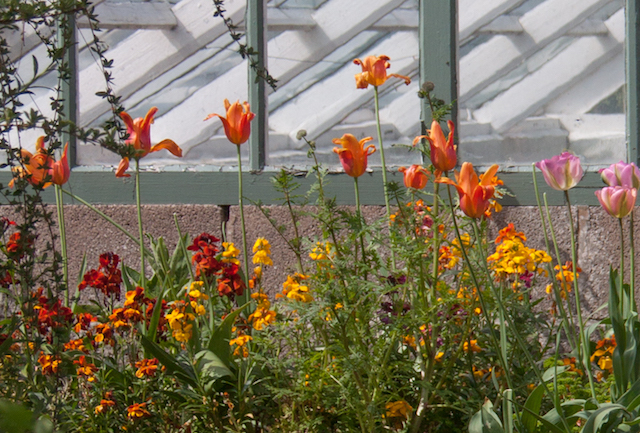 Wallflowers make an obvious complementary scheme but we do find them a bit hit and miss as we have a no-slug-pellet policy and, in a hard winter, the wallflowers may not make it. This image shows that even after the flowers are pollinated and the petals start to fade, Tulipa Ballerina is as elegant as her namesake. 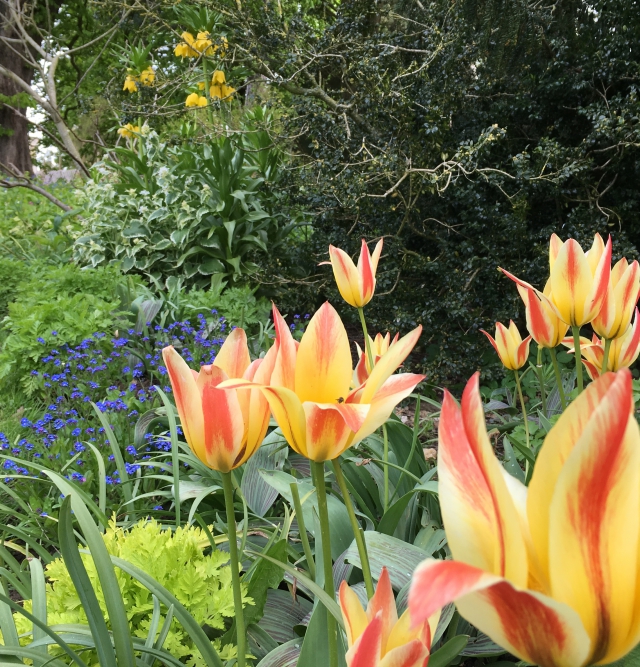 Tulips don’t need to be used formally. In our meadows and the woodland walk we use species, early and late tulips to complement the planting. Like the other tulips, these will need to be topped up every year. We order around 10,000 bulbs of which about 2,000 will be tulips.