After a winter of black grass, milky snowdrops and white double daisies, we have changed the planting in this terracotta pot for the technicolour flowers of spring. Blue anemones and muscari perfectly complement golden tulips. The colours are linked together in this spring container: golden tulips match the faces of the little viola and the whole is framed by white in the tulips and daisies. 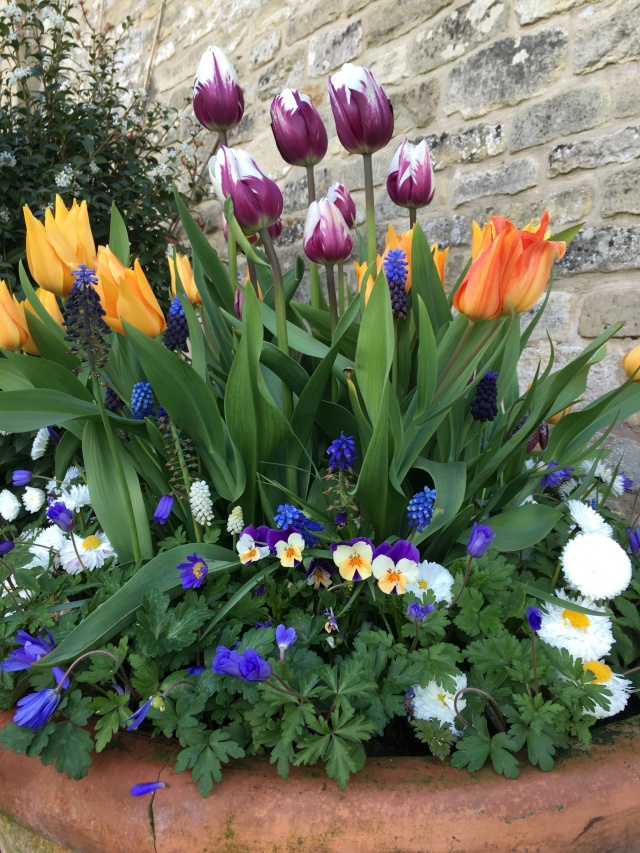 This pot is placed in the corner of the little meadows outside the history room. 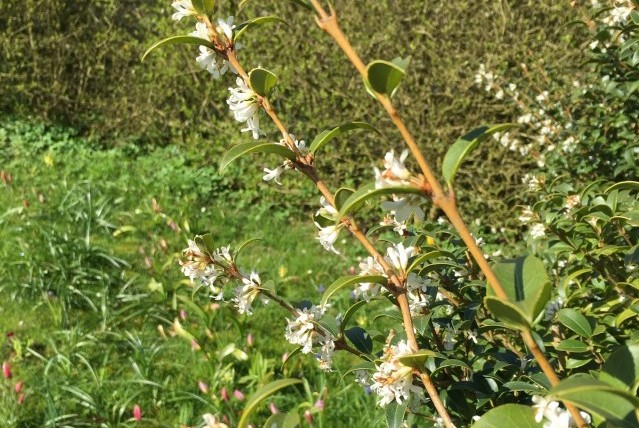 Behind, the hedge Osmanthus burkwoodii is in flower. In between squally wintry showers, the sun is strong enough to bring out the scent from the small white flowers dotted along the stems. This shrub is fairly slow growing but will eventually make a dense evergreen hedge. Osmanthus hedges should be clipped immediately after flowering. 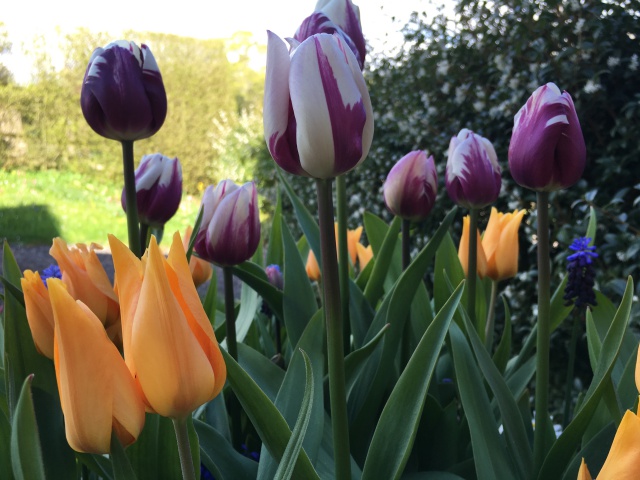 Here’s a close up of the tulips. The purple white tall tulip is Tulipa ‘Blueberry Ripple.’ We have grown this for a few years (always from new bulbs each spring.) It is particularly good for pot work.

The golden apricot tulip is Tulipa praestans ‘Shogun.’ Usefully, it starts to flower just before the main tulip season. It’s distinctive feature is that it is multi-headed, so the flowers in the bottom left hand corner of the picture join to one stem. Those that were left in large containers for a second year didn’t manage to make big enough bulbs so they only have one flower. 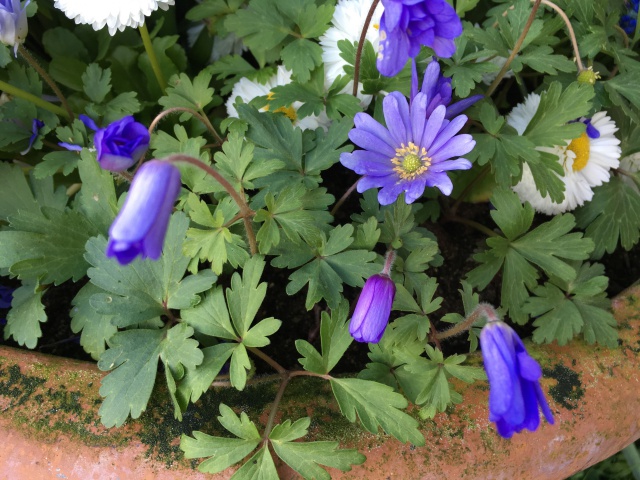 Anemone blanda is, perhaps, a surprising choice for a pot but it has proved to be excellent. The clean blue-violet petals (for the botanically minded they are actually sepals) surround the yellow stamens which makes them very satisfying to look at. (Hence the latin name; blanda = charming.) Peeping out from their foliage is the double daisy Bellis perennis which has been in the pot for some time, flowering all the way from February to April without complaining. 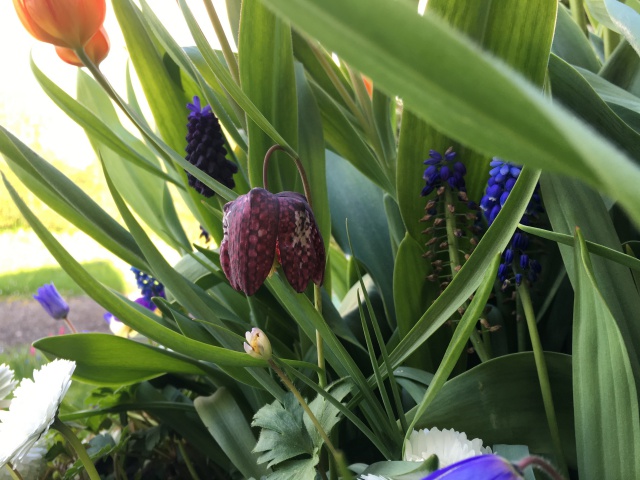 Nestling into the foliage near the bottom of the pot is fritillaria meleagris. We have trouble with this beauty but are trying to get it established in the meadow along the river. Lily beetle, pheasants and slugs all like the taste. We grow a few in pots each year and then transplant them after flowering to the river meadow (also known as the ‘soggy meadow’ because it floods regularly.) We haven’t had great success but here’s a white form that survived this year so I am going to persevere. 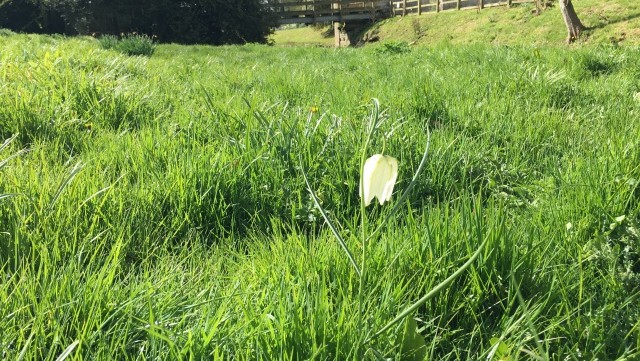 Look at how elegantly the narrow leaves frame the flower; they swirl around the flower like a courtier doffing his cap.

Speaking of elegance, I wanted to include this picture of some of our very old daffodils in this meadow. 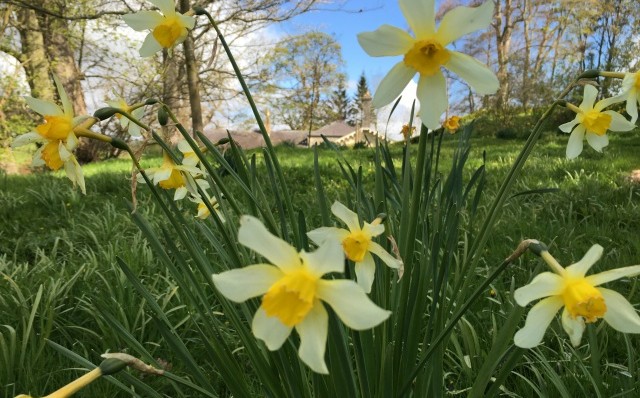 We split the bulbs last year (after flowering but before they died right back) and have been rewarded with ten times the number of flowers this year.

Back to the pot, this scheme doesn’t need a huge container to work. Here are the same flowers, with a change of tulips (Tulipa ‘Apricot Beauty’), in much smaller pots outside the tearoom. 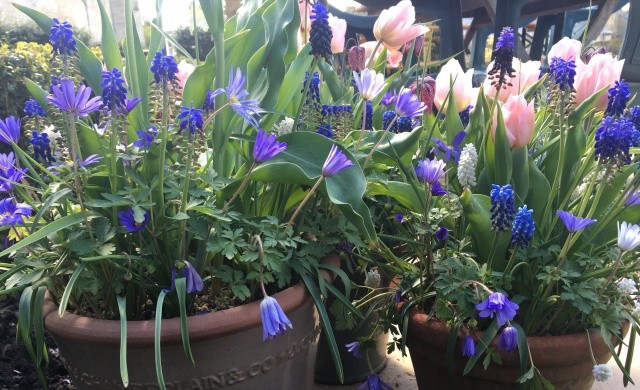 In this arrangement, the muscari are more prominent. This is Muscari latifolium (which could be loosely interpreted as a ‘musky grape hyacinth with broad leaves.’) Like Tulipa praestans ‘Shogun’ it flowers at a very useful time; after the big hyacinths but before the main tulip season. In the pickery we have combined it with the acid green flowers of Smyrnium perfoliatum (this time the latin means ‘pierced leaf’ – you can see that the stem appears to go straight through the leaf) 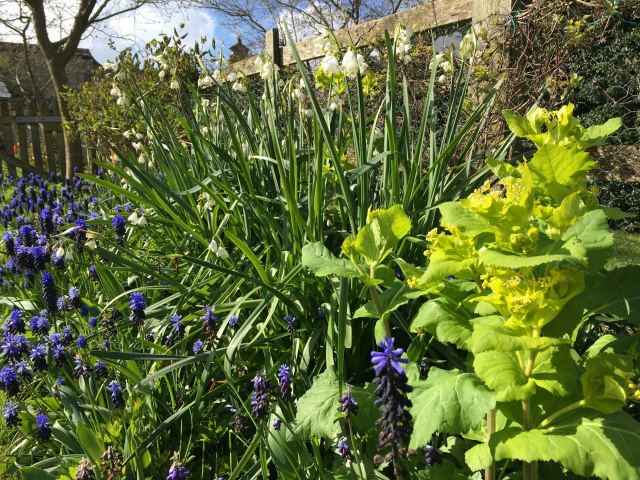 Here is Smyrnium on its own in the cottage garden sheltering under Rosa ‘Cottage Garden’ while we get on with jobs in the sunshine. It’s the epitome of the bright green new growth of spring. 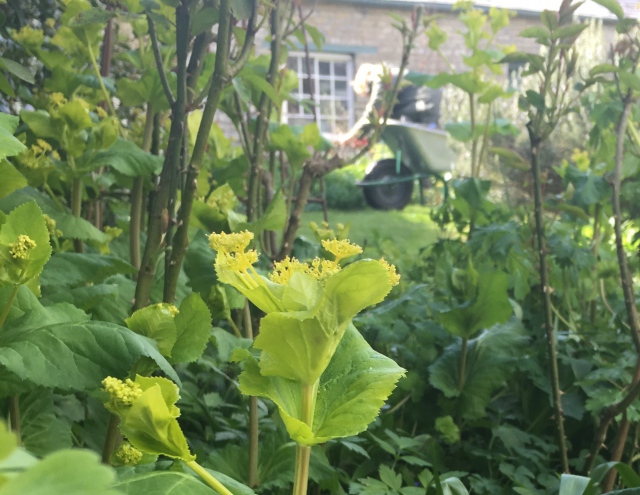