Ursula Cholmeley talks you through planting combinations for snowdrops at Easton Walled Gardens and suggests ways to use late winter flowers in your garden.

Where to use Snowdrops.

Snowdrops are a wonder flower for your garden. They work in a landscape or on a ledge, making them fantastically versatile for large or tiny gardens. Undemanding and delicate, with a honey scent, they will flower before the rest of the garden even breaks from the ground. Just when you need the leaves to vanish, (maybe a nearby geranium is spreading out in the spring sunshine) they die back quickly and won’t bother you again until January. We are always experimenting with new ways to use these little flowers. 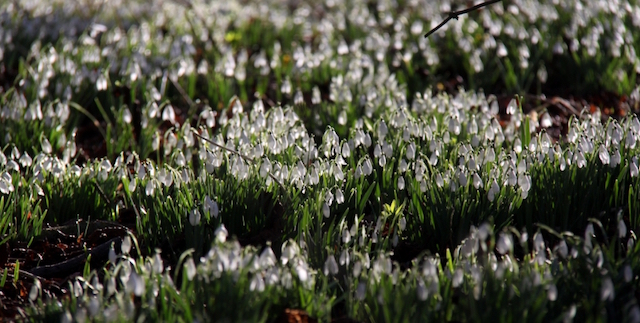 At Easton Walled Gardens, the delicate snowdrop has flourished since it was introduced. Some say the Romans brought them along the Great North Road, some say that the Tudor Cholmeleys planted them. No one really knows.

Whenever they were introduced, the slopes of the gardens are carpeted with small nodding flowers throughout February and into March. Across the valley, a bowl of white-washed green appears in the park. These are the snowdrops that were here when the re-discovery of the gardens began in 2000.  They prove that large scale plantings of a flower that grows no more than 15cm high can be highly effective. 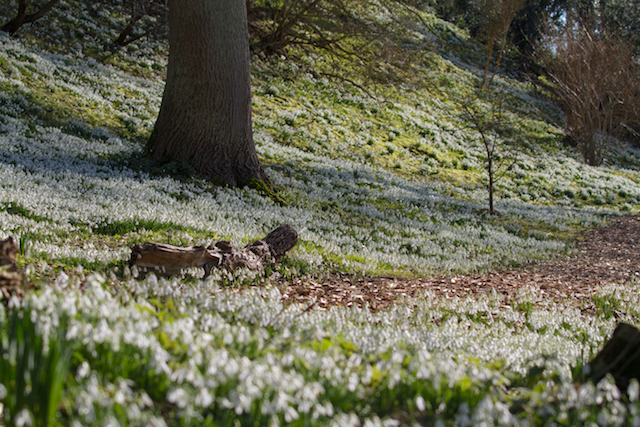 The smallest and the largest.

Although it is difficult to photograph, there is nothing more charming or evocative of nature’s power of invention than snowdrops around the skirts of a huge tree. Unlike a lens, our eyes notice movement in the branches and the wind passing over the nodding flowers below. We can see how a wintery light catches the edge of the tree canopy and the outline of 1,000 flowers, 5 metres below.

Snowdrops are almost ok just as sheets of white; but not quite. In our meadows, woodland walk and on the snowdrop bank, careful thought has gone into where and when we need to break into the snowdrops to provide contrast and an opportunity to draw the viewer in.

The effect here is natural. Hellebores, the obvious choice to combine with snowdrops (see later), are not planted here because their dominant colours would detract from the sheets of white. The interest comes from the landscape. The path winds through ash trees and the old course of the river is filled with water in winter. The reflection of snowdrops in the water adds to the scene. 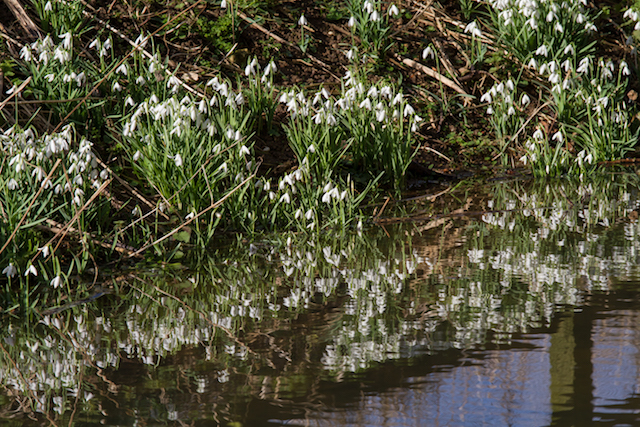 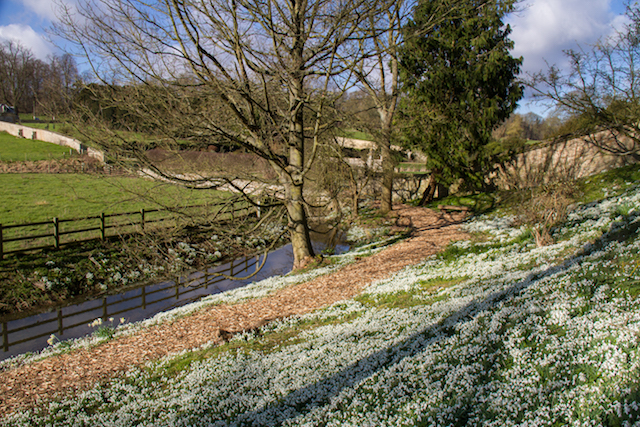 You can just make out some early daffodils on the water’s edge in this image – a pretty Narcissus called ‘Spring Dawn’; it is in flower by mid february. This isn’t always in its favour as heavy frosts or snow can lay it out for several days. It has pretty pale petals around a yellow trumpet and combines gently with the snowdrops. Further up the bank, Lonicera fragrantissima is a bare shrub that has small flowers of a similar pale yellow colour. They have an exceptionally sweet perfume. Like all wild gardens, scent and sound are as important as the visual scene.

Here, naturalised snowdrops are scattered through grass between even larger trees. When we started work they had already been joined by aconites and the two combine beautifully, set off by the green turf. 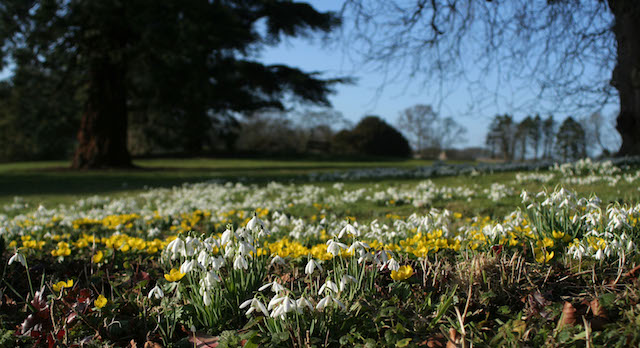 Aconites flower just before the common snowdrop (Galanthus nivalis) and the petals will hang on long enough to create a yellow and white patchwork effect. They can be established in large areas by scattering fresh seed where you want to see them and keeping the ground clear of brambles and nettles.

Early crocuses work well here too and we have spent some time experimenting with different varieties to find the ones that seem happiest and content to stay. (Not always a given in a meadow.) The ‘tommies’ or Crocus tommasinianus come in various shades of lilac through to deep purple. We use ‘Whitewell Purple’ and ‘Ruby Giant’ mixed with the original species. Order the corms in September and plant as soon as they arrive.

Usually by early March, Narcissus Tete-a-tete will be up and will provide a yellow foil for the snowdrops. The aconites are just green now with emerging star shaped seed pods replacing the flower. 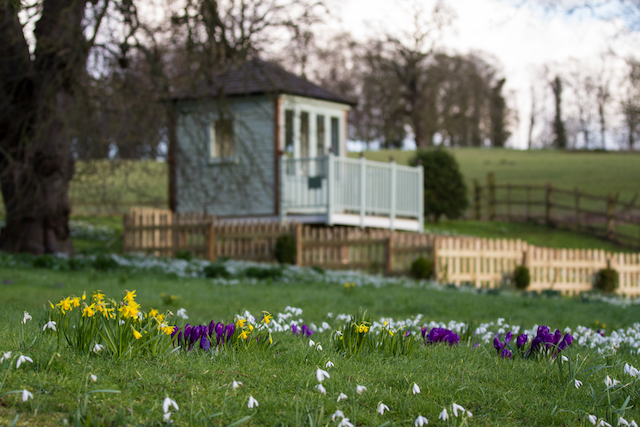 Snowdrops for borders and garden edges.

A winding path leads off the White Space Garden through the woodland walk and the shrubbery. Here the snowdrops are combined with perennials and spring bulbs to create impact closer to the viewer. In other words, it’s a lot more colourful and you can get in amongst it.

The combinations we use here would work well under shrubs, in a cottage garden setting and in the middle of herbaceous borders where the dying foliage will be covered late in the season.

Hellebores are natural companions, flowering from January to April. If you consider that a tulip may last 10 days if you are lucky, hellebores are remarkably valuable. Their sepals (the petals are tiny) retain colour when the seed pods form and only when they are really tatty do you need to cut them off. Rich deep colours and spotty, picotee or anemone flowered forms add to their allure.

Swathes of colour can take a while to build up (hellebores like to settle in to give you decades of slowly increasing blooms) so it’s good to consider another common but often overlooked snowdrop ally – the arum. Flashes of silver on the leaves makes this a very sophisticated combination that is well worth seeking out. 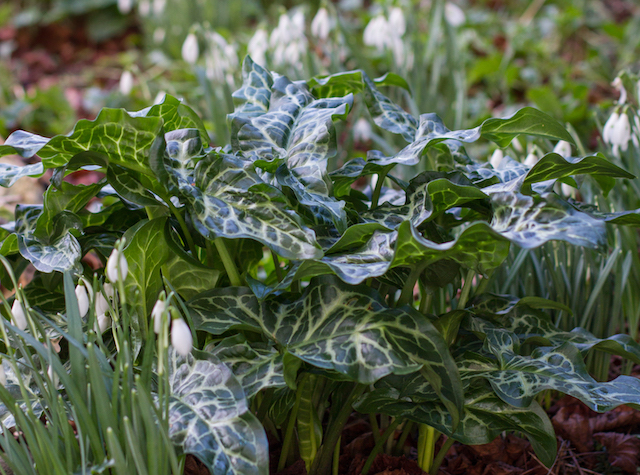 In the woodland walk, the main show is provided by Galanthus nivalis, the ‘common’ snowdrop and Galanthus Flore Pleno, a double form that spreads easily amongst the dog’s mercury and yellow aconites. 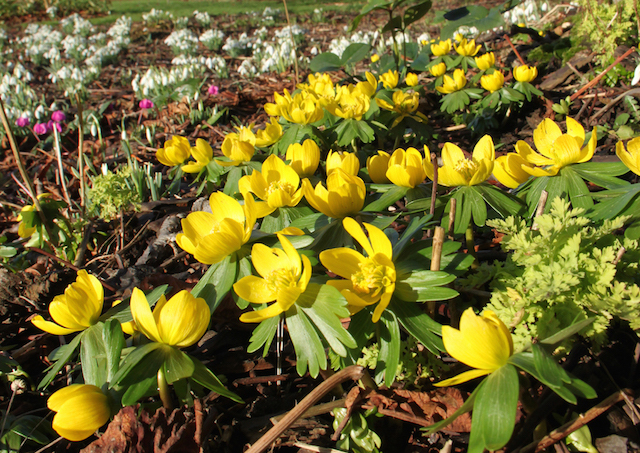 On the edges are cyclamen coum, small early irises and a pulmonaria called ‘Redstart’ which is particularly good on alkaline soils like ours.

You can see them together with a hellebore in the picture below. 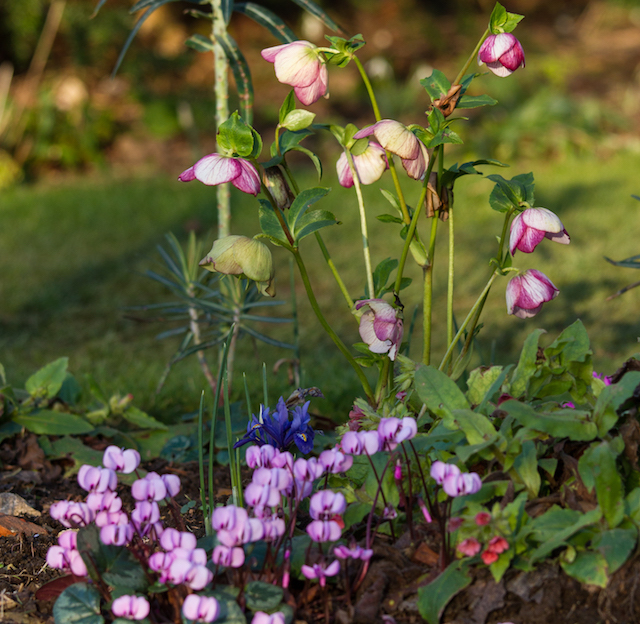 Snowdrops work in troughs and small beds, containers and pots. A snowdrop collection needs its own space and some permanent labels – beware the family strimmer getting busy in your precious space in high summer and beheading all your labels. Our alpine beds and troughs are home to about 10 varieties of snowdrop. Early elwesii forms such as Galanthus ‘Fred’s Giant’ (shown below) are usually the first up and they can be grown with little iris such as ‘Katherine Hodgkin’ or Iris reticulata ‘George.’ 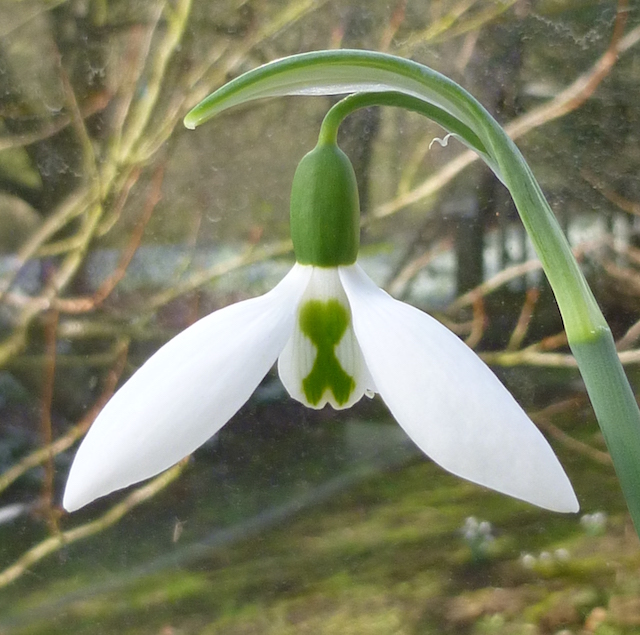 Our cottage garden and secret garden have unusual snowdrops too. I particularly like the double yellow ‘Lady Elphinstone’ although she can be quite miffy; coming up green in some years.

If you are using containers, consider using foliage for background colour. Ophiopogon planiscapus ‘Nigrescens’ is a classic but you can also use variegated sedges, as shown here. 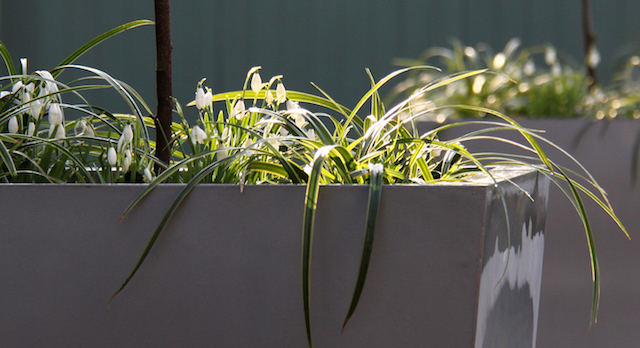 The young foliage of golden feverfew can be equally dynamic and we use this in a bed under the black walnut mixed with a large Galanthus nivalis form to great effect. 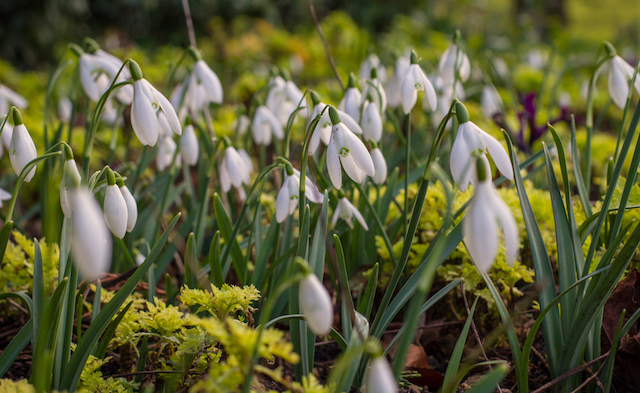 Purely ornamental containers can have snowdrops housed temporarily in them. We dig up clumps just as they start into growth and move them into round terracotta pots – once they have flowered we lift them out, split the bulbs up and re-plant them in a quiet area of the garden.